“When I was twelve, my father returned to Palestine. We remained behind in Berlin. His dream of building a house and fighting for a free Palestine was shattered: He was expelled by the Isrealis. There he stood again at our door. Tired eyes. Tired bones. My mother looked at him and, saying nothing, let him in. Since then, he has been sitting in the basement, like a turtle tucked away in his shell.”

The Turtle’s Rage tells the story of an enigmatic man, whose life is shaped by flight and expulsion, exile, and the failed attempt to return to Palestine. His is a life torn by the Israel-Palestine conflict. It is the story of the director’s father and of a daughter’s search for answers. It is the story of their journey together through Egypt, Palestine and Jordan. A story so nuanced as to thwart the simplified notions of victim and perpetrator, good and evil, black and white. 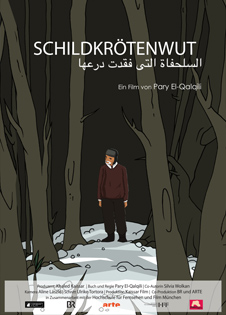